“I climb behind the steering wheel… I drive off immediately without once looking back; it’s a long journey but it leads to freedom.”

Google predicted a drive time of 9.5hrs for a distance of 390 Kms from Desia (Lamtaput) to Mandasaru via Koraput Town and Jeypore. Sarat (our heritage guide at Koraput) suggested a better option via Nandapur, Smiliguda, Damanjodi, Rayagada thus bypassing the busy town of Koraput with an objective of making it in 8.5hrs. Essentially following NH 326 from Lamtaput to Similiguda and then continue until Rayagada, thereafter switch to SH5 till Tumudibandh, thereafter step on to NH 59 until Daringbadi junction, from where you steer towards Raikia on SH7A, the final stretch from Raikia to Mandasaru is on a village road. Over 8 hrs for a 380 Kms stretch essentially means narrow roads or cratered roads. We encountered both. This time the National Highways seemed better than the State Highways.

The route meanders through some contrasting scenery such as  green forests and barren mineral rich hills with deep blue skies as the backdrop. As we weave throug Panchpatmali hills and Chandragiri-Pottangi subrange of the Eastern Ghats. Beyond Simliguda into Damanjodi and beyond it’s a typical countryside road with frequent heavy duty truck carrying bauxite. It’s reverberations & cloud of dust in a way warning you to side-step from the road and wait for the truck to go past safely. The roads around Damanjodi were narrow but reasonably good to drive. 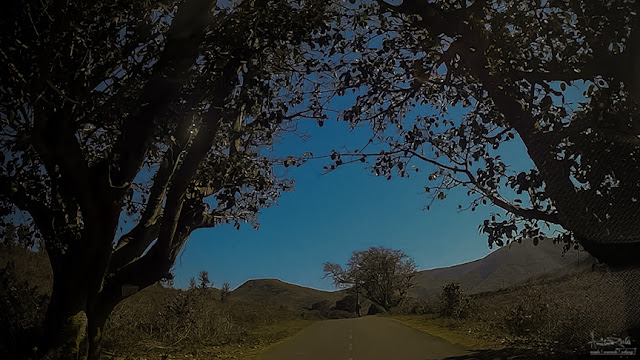 At this juncture it is important to appreciate the dichotomy of the tribes and their socio-political conflict because of which many areas of the highlands are branded as a 'red corridor'. Odisha is endowed with a variety of mineral resources and occupies an important position in India's mineral map. Among all the minerals, bauxite is prominent. The state accounts for majority of Indian bauxite reserve, with over 98% of the deposit being in Koraput district. Within Koraput, the Panchapatmalli hills near Damanjodi holds a significant reserve, and which is being currently being mined by National Aluminum Corpn. Since the 1970s, with the NALCO Bauxite Mine and Plant at Damanjodi coming into production, the states industrial economy began to change. Along with industrialization displacement, compensation & rehabilitation came to fore, as the most impacted folks were the tribes of South Odisha. There have been claims, counter-claims based on research conducted by numerous agencies to evaluate and document the impact on ecology, livelihood, access to safe drinking water, effect on irrigation etc.. that have been debated every now and again. These lands have belonged to Adivasi tribes for centuries, and every tribal community has their own tradition linked to their land. Many basic issues remain unanswered, since we as a nation have struggled to maintain the balance that is needed ignoring tribal religion which is based on respect for the natural world. Even though the lovely slogan displays on the preservation of nature, line the highways the ground reality is far different in many of the affected villages.
As you drive through these amazingly beautiful landscapes nurtured by the Tribals since the Paleolithic era, one wonders in anguish the grave travesty of justice meted out. 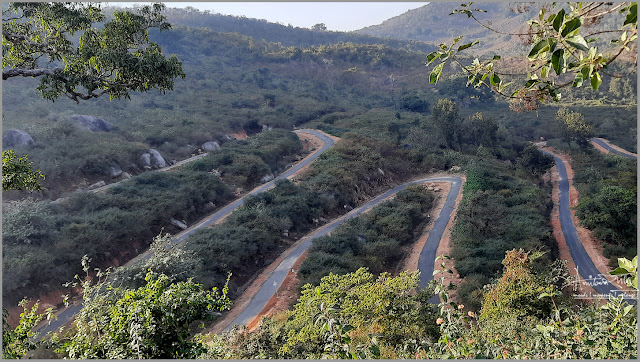 Continuing our drive beyond the aluminum town of Damanjodi and as you pass Rayagada, you are led on to SH5. This stretch of drive was a sheer test of nerves with plenty of craters and speed breakers, in some sections there was no trace of road. Thereafter NH59 greets you with delight as it is a wide silky road, perhaps newly laid. At NH59 we made our customary break to dig into our packed brunch of parathas and aloo sabji. A delicacy indeed. Having made slow progress on SH5, we decide to move on quickly without wasting too much time. Much of the route was through forests and hilly terrain, and we frequently came across signboards to give way to wildlife and in particular to elephants as we were criss-crossing through elephant corridors.

While getting past Baliguda and Raikia we came across folks of another primitive tribe …. the Kutia Kondh. The Kondhs are an animist tribe largely hunter-gatherers the biggest ethnic inhabitants of Kandhamal district. The name Kandhamal means the garland of hills where the Kandhas (Kondhs) live. Kandhas, or Khonds, are the original inhabitants of this region. 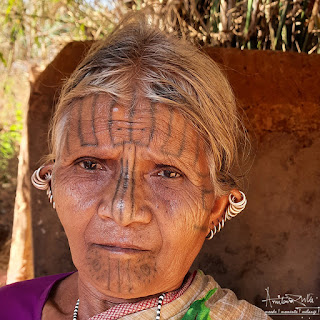 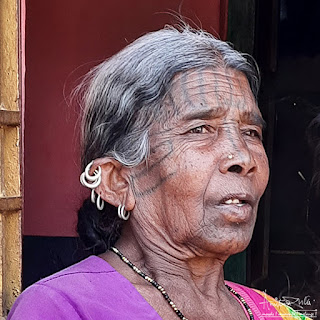 The women of the Kutia-kondh tribe have special tattoos on their face and body parts as an identifying mark in their afterlife. It also avoided stealing of tribes by rival tribesman note some of the historians. The Kondhs have had major run-in and bloody conflicts on account of encroachment of land, culture, identity and religion. The British geologists named the mineral rich base rock as Khondalite, as a respect to the Khond tribes who inhabit the region.
It was past 4pm when we arrived at Mandasaru Valley Nature Camp. Surrounded by dense deciduous forest, the Nature Camp is located in the eastern side of Kandhamal district at the hilltop with a panoramic view of the Mandasaru gorge. The Nature camp is about 1000 steps above and overlooks the gorge.

Mandasaru, is a unique gorge ecosystem. It is named after the rocks on a hill that narrow towards the top, Manda meaning rock and Saru meaning a narrow progression. The Mandasaru ecotourism site has been developed by Odisha Forest Development Corporation and the facility is managed by Women SHG (Self Help Group) members from the local community. They are doing a decent job. They try their best to make things as personalized as possible in a very informal setting.

The nights at Mandasaru were very cold during February with clear skies. The day time was pleasant sunshine. Apart from birding, we went for walks around the Nature Camp. Somehow did not muster the courage to go down to the gorge. We were adequately warned of the almost 1000 ft drop and the steep & slippery climb on the way back. We rather took the help of local (so called guide) and drove around the village side. Unless you are trekking down to the gorge and exploring the region more extensively, you can wrap up Mandasaru in a day or two at the most.

At the camp birding activity was quite good. We witnessed almost 25 species of birds such as Blue-capped Rock Thrush, Common Tailor bird, Indian Nuthatch, Brown-capped Woodpecker, Verditer Flycatcher, Indian White-eye, Golden Oriole and a host of Warblers amongst other common ones.
Having spent 3 nights in the Silent Valley of Odisha we moved on to be amongst the royalty of Dhenkanal - Gajalaxmi Palace, as our next pit-stop.