Kuchch- The Hills and the Flats
beyond the RANN

We stayed at CEDO Home Stay (Center for Desert & Ocean), at Moti Virani, Kuchch, run by Mr Jugal Kishor Tewari and his family. The Tewari’s are an ecologist and naturalist family. Conservation seems to run in their blood and they operate many initiatives related to environment and other social causes through their CEDO Trust.
Having worked on Field Environment and Ecology of Kutch and other arid regions of the world for long time, Mr Tewari, is an authority when it comes to the natural history of Kuchch. A passionate human being and an insightful preacher. In his foot steps, every member at the CEDO home stay are outstanding folks. Loved interacting with each one of them. For more detail checkout www.cedobirding.com.
Kuchch is an active tectonic region and a place with spectacular geological monuments. Earthquakes are quite common here, which in-turn is continuously altering its  geo-morphological character. Kutch basin is richly gifted with different deposits and structural features of a geological time scale since 200 million years. The region is conspicuously featured by uplands surrounded by lowlands. The uplands are rugged hilly terrain bordered by coastal plains. The lowlands are mud and salt flats (Rann) and grassy undulations (Banni).  Sedimentary rocks from the Jurasic age cover Kuchch. Limestones, shales and sandstones are the most common rocks, apart from basaltic rocks. Number of plant & animal fossils have been found in the region.  Mr Jugal Tewari houses an impressive personal collection of such fossils at CEDO. We were privileged to have a glimpse of his impressive collection. 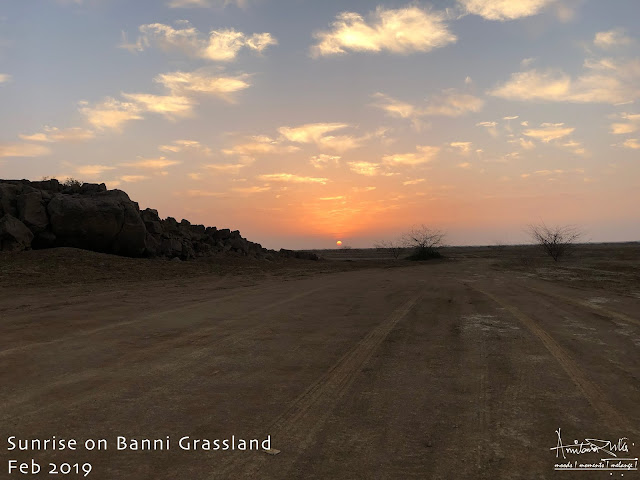 Banni Grassland (Lowlands) is an area where the ‘Maldharis’ rear the famous Banni cattle breed (which is productive even in extreme weather conditions). In decent times this vast grassland is usually under 2 - 3 feet of water and thus a good ecological habitat. The Maldharis are in dire state this year due to truant nature of monsoon for the third successive year.
The drought on the other hand has bought forth a natural wonder for wildlife seekers. The grassland has become a thriving colony for bandicoots, which in turn has attracted Raptors of all sizes and shape. During our recent visit you could see anywhere between 100 - 300 raptors hunting on the vast Banni Grassland, apart from other predators such as Jungle Cats, Desert Cats and Indian Jackal. Such large concentration of Raptors is a rare phenomena. More about birding and wildlife in a separate post. 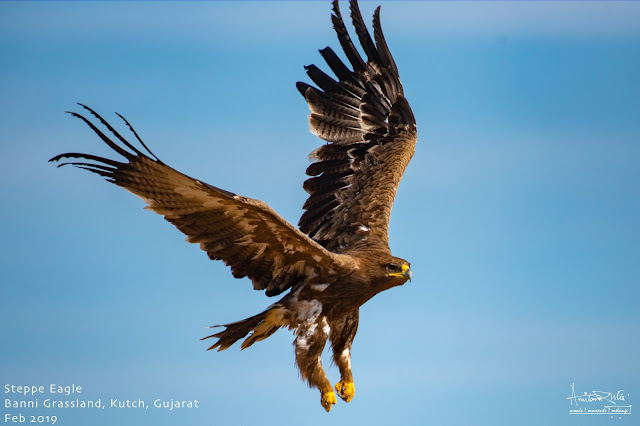 There are several sites in Kuchch which were part of the Indus Valley Civilization, which existed when the Indus river flowed through Kuchch. This has perhaps influenced the heritage & practices of the land. Employing traditional methods, from lands as far as ancient Persia, the people of Kutch produce some of the finest handicrafts, jewellery and pottery, and the region is a riot of colour, skill and beauty.
Another place of historical interest is Lakhpat, named after the ruler of Sindh Rao Lakha. It was an important trading port, as long as the Indus river (Sindhu) flowed through Lakhpat. It is said Guru Nanak Ji stayed at the Gurdwara Lakhpat Sahib before his voyage to Mecca from Lakhpat Port.
The Lakhpat Fort built in 1801 still stands testimony to the once upon a time glorious period of Lakhpat.
BSF’s Lakhpat Border Outpost stands adjacent to the Fort, guarding the region against any enemy onslaught from across the coastline.  We felt privileged to be allowed to spend time with the BSF folks at the BOP unit, to hear about their world, lives, and experiences. Quite a humbling interaction since our visit happened few days after the Pulwama incident and the borders were quite tense.
35 Kms south-west of Lakhpat lies Narayan Sarovar, yet another unique eco-system. The Kuchch region boasts of the longest coastline (1650 Km). Partly due to the tectonic activities and shallow shoreline, the coasts are blessed with an abundance of marine resources. Though initially planned, we somehow did not get time to explore the marine life this time. There is so much more to explore in this enchanting region, that the 4 days we spent is just not enough. It surely mandates another visit.
When you visit next time, do step beyond the Rann, think of walking/driving across the Rann if you dare to take a little risk. Or check out the nomadic breeds of Kuchch such as Banni buffalo, Kankrej Cattle, Kharai Camel, Tazi and Kuchi Afghan Shephard dog breeds. Or try and experience the rural tribes and pristine villages. You would be pleasantly surprised.

Seek out unchartered territories! Should you need any guidance, feel free to ping me.

We moved on from the mesmerizing region of Kuchch to the only remaining abode of the Asiatic Lion within the Girnar Mountain Range! .. more about it in the next update… Stay tuned.
Do spare a moment and share your feedback.