While one half of Kerala is along the Western Ghats, the other majestic half is its intricate network of lakes, lagoons, canals, forming the famous backwaters. Vembanad Lake, the largest lake in Kerala and spans across three districts - Alappuzha, Kottayam and Ernakulam. One of the most popular destination on the shore of the lake is Kumarakom, which was our next destination as we drove off from Wayanad. 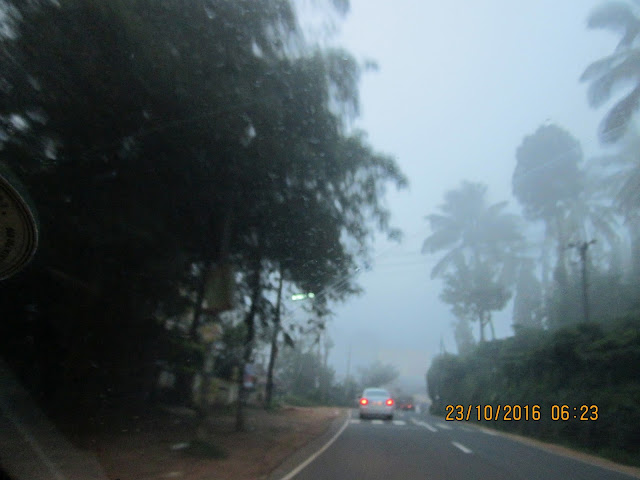 We started off from Kalpetta fairly early in the morning, would have preferred to leave earlier but for fog. On hilly roads, dense fog is better avoided.


Much of the roads in Kerala, wind their way through the hilly terrain, and almost all of them are double lane. There is practically no 4 lane carriageways within Kerala, barring a few exceptions. Having said, the condition of the national highways are excellent while the state highways are sad. This too has been an interesting revelation - Where NH/s is bad the SH/s are great and vice versa.

From Kalpetta, our route took us through Vythiri, Thamarassery, Pantheeramkavu, Tirur, Ponnani, Paravur, Ernakulam, Kumarakom along NH 66 a very nice drive, but could get clumsy due to ever growing traffic.

We had two pit stops at Cochin on our way to Kumarakom. Both the stopovers were to meet college mates who hail from Kerala.
Pit stop – 1 …. Sabu VR and family. We joined Sabu’s family at lunch, a sumptuous and lip-smacking spread. The interesting part of the visit was a peep at Sabu’s new home. A marvellous and colossal bungalow, very well designed and built. We missed the house warming event by a whisker (scheduled a week later). Over time I guess it will be bustling with life, greenery and colour.

Pit stop -2 was at Ajit’s home. Ajit & I were meeting after 35 years, since we passed out of college. Obviously there was much to talk about and catch up over coffee and snacks at Ajit’s place. Ajit had built an interesting home, energy efficient and with good use of technology for recycling. It had a fish farm, poultry and significant kitchen garden. Very impressive indeed.


We learnt a few unique practices about the Kerala way of life  – a) most people live in independent houses or bungalows; b) the designs of the bungalows are quite similar; c) all most every bungalow has its own fresh water well; d) almost every house has a garden small or big and a few coconut tree; e) everyone seemed to be in tune with nature!

While at Kumarakom, we stayed at Vivanta by Taj Kumarakom. A pristine property. Over the years having experienced Taj luxury at many of its properties, it is apt to say that your value for money is assured

Vivanta by Taj Kumarakom was no exception. The experience in this case was a notch above the rest. The crew at Taj Kumarakom led by Mr Jayanta Das (GM) made sure every finer element was taken care off. Thus from welcoming to settling down in the rooms, to the sun set coffee and snacks session, the lamp lighting ritual, the entertainment program by local artist, and finally the choice of food was exceptional.

We stayed in the Deluxe Allur Villa overlooking a pond and every phase of the day was breathtakingly beautiful.

One of the main attraction of choosing Taj Kumarakom was its proximity to Kumarakom bird sanctuary. Did not realise it was that close. Kumarakom Bird Sanctuary and Taj Kumarakom have a common boundary wall.

The Kumarakom Bird Sanctuary is located on the northern fringes of Kumarakom village. The Vembanad Wetland system was included in the list of wetlands of international importance, as defined by the Ramsar Convention for the conservation and sustainable utilization of wetlands in 2002. It is the largest of the three Ramsar Sites in the state of Kerala. 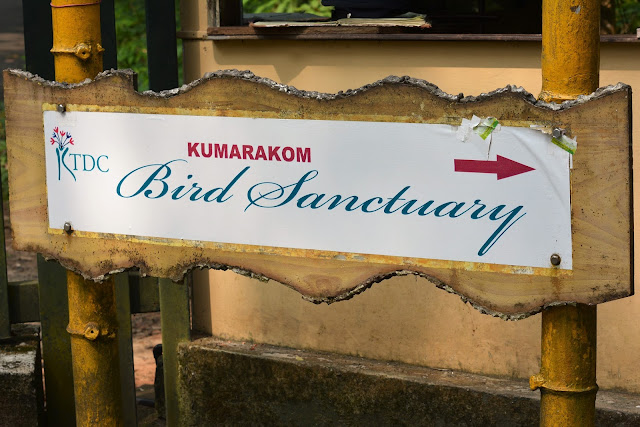 Though October is not the best of the times for birding, nevertheless, I had an eventful day at the Bird Sanctuary, I could manage to spot ‘Paradise Fly Catcher’ a stunning beauty.

Absolutely well worth the 3 nights at Kumarakom.


Next : Part 9 : Bird kingdom at Kumarakom