Here are a few of my spotting at Wayanad. I have attached a little bit of explanation to make it an interesting read.

Most people visit a forest to see a Tiger! I have heard many a times people saying there is no wildlife here. Recently, I met a family who had spent quite a fortune to visit a forest and were greatly dissapointed at the end of the visit, because they could not see anything apart from a few deers or an elephant in captivity. Whereas the forest as such was full of action happening all around. This post is to excite the explorer within you. There is so much happening around, you just have to activate your senses, have patience and simply observe.

Its an awesome feeling when you capture a species in your camera and thereafter learn more about the species. Suddenly the world around you becomes informative, interesting and captivating. Not just the animals or reptiles, you can explore birds, spiders, butterflies,  trees, flowers, each one of them have a huge story to tell.

Most of the observations below happened in and around Verdure Wayanad (Kalpetta), the resort where we  camped.


The scarlet minivet (Pericrocotus speciosus) is a small passerine bird. This minivet is found in tropical southern Asia from the Indian subcontinent east to southern China, Indonesia, and the Philippines. They are common resident breeding birds in forests and other well-wooded habitats including gardens, especially in hilly country. The scarlet minivet is 20–22 cm (7.9–8.7 in) long with a strong dark beak and long wings. The male has black upper parts and head, and scarlet underparts, tail edges, rump and wing patches. The shape and colour of the wing patches and the shade or orange in the male varies across populations.  The female is grey above, with yellow underparts (including the face), tail edges, rump and wing patches. 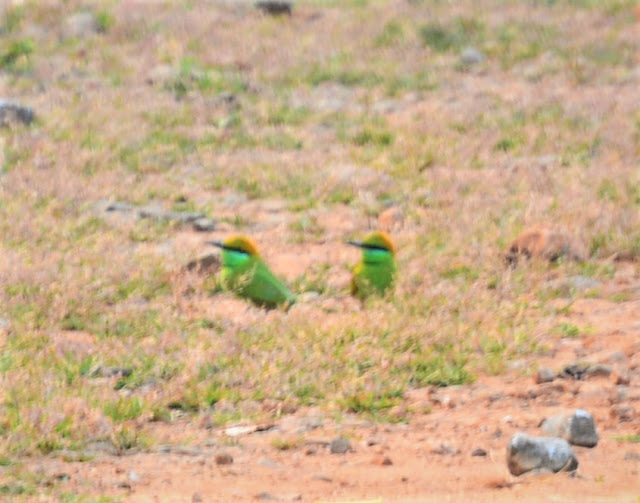 
The little green bee-eater (Merops orientalis) is an exquisite little bird with bright emerald green plumage. The little green bee-eater can be identified by a narrow black stripe on its throat, known as a ‘gorget’, as well as a black ‘mask’ that runs through its crimson eyes. Also distinctive are the two central, long, narrow, black tail streamers. The wings are largely green, sometimes tinted with gold or reddish-brown, and have a black trailing edge. The crown may be green, or may be strongly tinged with reddish-brown, and the bill is long.


Next - Part 8 : Kumarakom (backwaters of Kerala)